Visitors of Wildlife Friends Foundation Thailand (WFFT) spray and scrub Boonmee’s wide torso and gently sloped back. As instructed, they carefully avoid her left rear leg where she has a  large abscess. It’s a constant reminder of the bullhook that repeatedly pierced her skin at a nearby trekking (elephant riding) camp for tourists. At 57, Boonmee is also blind in her left eye and has a large indent across her spine from decades of weight on her back, a permanent injury that most of the 13 rescued Asian elephants at WFFT share. Her abscess is treated twice a week at the nearby state of the art animal hospital, where two full time vets re-clean the wound. In the next year, she will be taken to the soon-to-be constructed elephant hospital at WFFT, the first of its kind in Thailand. But for now, she is happily sprayed down with cold water as her favorite time of day plays out.
Every animal at WFFT has a name and a story. Many of the primate, monkey and bear rescues were once in the tourism industry; either performing in shows or used as street attractions for passers-by to hold in photos (easy to hold because they’ve been drugged).

​Some of the animals were household pets, cute and cuddly as babies but then difficult to manage as they grew older. Most animals are abandoned before WFFT receives a call, with the exception of the elephants that WFFT pays to rescue. With limited government regulation and no authority to confiscate, the dedicated group works with the knowledge that most captive animals throughout Thailand continue to be terribly mistreated.
The process is called the kraal, which translates to “crush.” The term refers to a metaphorical crushing of the animal’s spirit, a process of domestication that attempts to remove its natural behaviors, allowing it to be used for tourism. During the “crush,” captured wild elephants are placed in a large cage and tied with ropes to keep them from moving. They are often beaten with sticks, chains, or bullhooks during this period, and sometimes deprived of food, water, and sleep to ensure their submissiveness. Others are bred in captivity, where they will live their entire lives. These captive, “domesticated” elephants, account for approximately half of Thailand’s total elephant population. They will be used to make profits, managed by “mahouts,” or trainers, who use bullhooks to reinforce behaviors. They work long days only to be chained each night, kept apart from one another, unable to socialize. While Boonmee and the other elephants at WFFT now have a safe environment to live out the rest of their lives, the sad reality is that WFFT is only able to buy their “freedom” once they are old, injured and no longer valuable to their owners.
The full-day experience allows visitors to walk side-by-side with Boonmee, feed her a few bananas, and later give her a bath, but that’s it. All interaction is carefully managed by WFFT staff, including its passionate Education Officer, Tanya Cameron. In an interview with Cameron, who’s been with the organization since 2012, she expressed her fear that without drastic changes, the Asian Elephant may soon succumb to the same status as the rhino, noting that “these animals are already critically endangered.”
Visiting WFFT and other places with humane practices is a good start, but it’s far more important not to visit trekking camps or participate in similar forms of “animal tourism.” As with many other important causes, the power to change is squarely in our hands. “It’s just a way of thinking," Cameron says. "Until tourists stop, we’re not going to see any changes.” 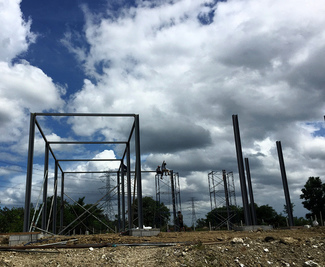 Thailand's first elephant hospital in construction
The best way to help is to donate! As a non-profit, WFFT relies heavily on contributions for day-to-day costs (including food for animals), as well as large projects like the new elephant hospital.

If you’re looking for a more hands on experience, head to Thailand and volunteer. They accept volunteers for as little as one week, but prefer longer stays (up to a few months).

If you’re in Thailand but don’t have time to volunteer, WFFT offers a full-day experience for visitors to learn more about these incredible animals.